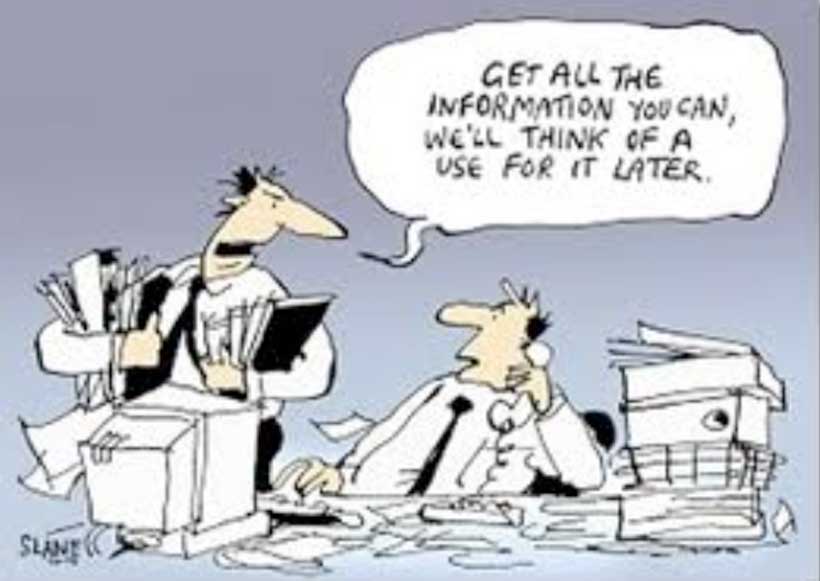 What is Big Data?
I’ve always found the term Big data a bit curious because of its similarity to Big Pharma, Big Oil, Big Sugar and Big Tobacco; all largely pejorative terms that refer more to the powerful super-giant corporations that dominate each industry than to the product being harvested or manufactured. Big Anything implies profit at any cost and money-no-object special interest lobbying power.

So, when big data was coined and popularized in the 1990s and the 2000s, was it a deliberate nod to those other Big industries? I’ve looked into a few histories of the term, but can’t find anything that addresses the question. Any thoughts?

Definitions of big data typically focus on what makes the data (i.e. the product) unique rather than the corporations who have vested interests in it (despite our growing awareness of these corporations and security services). For example, Wikipedia describes big data as ”a blanket term for any collection of data sets so large and complex that it becomes difficult to process using on-hand database management tools or traditional data processing applications”.

In 2001, Gartner characterized Big Data as growing along 3 different axes — the 3 V’s — not just volume, but variety and velocity as well.

Big data – the new oil
When data becomes a commodity, then it stands to reason that the more data the better, right? Maybe not. In many cases, the challenge isn’t to make more data, but to figure out what to do with what we already have. In other words, the challenge is curation rather than creation. Curation is about finding meaning in data, storytelling and adding value to data. And, of course, this is data visualization’s mission.

Maybe not the most glamourous side of data viz, but important none the less.

This week’s tools
In keeping with this week’s theme, we used the second half of the class to try our hands at a number of open source tools for wrangling and scraping data:

The verdict? Investing a little time to learn XPath code goes a long way, when combined with GoogleDocs and Scrape Similar. Here’s a couple of good tutorials:

DataViz in 6 Weeks is my blog about teaching Introduction to Visual Analytics at OCAD University in Toronto. Comments, follows and shares welcome. #DataVizInSixWeeks

Anne Stevens I am a multidisciplinary designer working in data visualization, interaction design, innovation and critical design. I am particularly interested in non-screen based physical representations of data and tangible user interfaces.